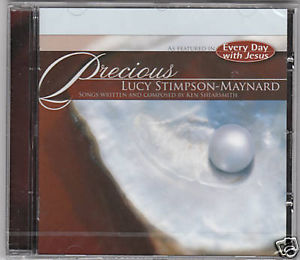 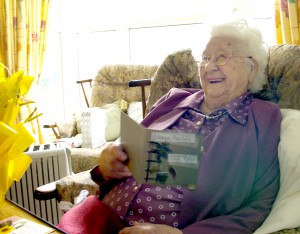 Ken’s mum on her 102nd birthday

Here is the amazing story of my mum becoming a Christian- it would have been her birthday on Sunday, March 8th.
My mum, Audrey Lillian Shearsmith, had attended Chapel as young girl and I knew that she said her prayers without fail every single day. However in 1997 I still was not sure how she would react to me telling her that I had become a Christian. I therefore showed her a little book from the Alpha course entitled “Why Jesus?” and we had a short chat before she told me to leave it and that she would read it later.
When she was 102 years old and was living in the wonderful Chesterholm Lodge Care Home mum asked me what a Christian was and how you could became one. I simply said that to become a Christian you ask God to forgive you for all the things you have done in your life that have displeased Him and to ask Jesus to come into your life. She then smiled her special smile and pointed to her bag and nodded for me to look in it. And there it was -the “Why Jesus? book that I had given her five years before. I told her that there was a prayer in the book that she could say if you wished to become a Christian. Mum immediately read out the prayer aloud. I was sitting on the bed beside her overjoyed, but at the same time almost not believing what was happening, in fact so much so that I told her that just saying the prayer was not enough she had to really mean it; so she said it again, but this time with even more meaning in her voice! I noticed, Mandy, one of her Carers who worships at my church was outside mum’s room, so I went out to tell her the good news. “Halleluiah” Mandy cried out before telling me that she was not in the least bit surprised because mum had been talking about Christianity for some time. So mum became a Christian at the age of almost 103!
A few days before she died in August 2006 I was with her on my own. She looked at me with so much love, smiled that wonderful smile again and told me that I was precious.
The day after she said “precious” to me I was looking at Psalm 116 and the word “precious” jumped out of the page. “Precious in the sight of the Lord is the death of His saints.” I read in the concordance that “precious” means, not only highly valued, but also carefully looked after – I can’t tell you how reassuring it was to know that in mum’s last days she was being carefully looked after by God. And she was; all those who were with her will testify to how much at peace she was. She was in no pain whatsoever and was as sharp as always. She left this life in a very gentle and serene way – there is no doubt that she was indeed being carefully looked after and watched over by God.
The day after reading Psalm 116 it was a Sunday and I sat at the back of Holy Rood church with no one on the one seat beside me. Beryl, a retired Curate, came in, which was a bit of a surprise because normally on a Sunday morning she worships at an associate church; coming to Holy Rood for the evening services. Although we are good friends I had not sat with Beryl before, but on that Sunday she asked if she could sit on that one free seat by my side. She knew that my mum was very unwell from the church notice sheet and when she asked me I told her that mum was, in fact dying.
At the end of the service Beryl told me that she had prayed for my mum and me and that during the service God had given her a picture. She had seen a beautiful meadow in which stood a rock- a rock that had been very “precious” to her friends and family. The rock was also “precious” to God. Beryl saw the earth around the rock become disturbed and God taking this “precious” rock up to heaven to be with Him.
Mum died the very next day.
Beryl led mum’s thanksgiving service.
Quote of the week
Don’t worry, everything will turn out for the best
Audrey Lilian Shearsmith