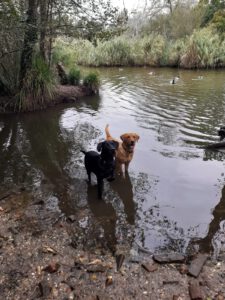 My daughter’s dog died recently and she is heartbroken. Will we see our pets again in heaven?
We often hear these sorts of questions asked by children, but it’s just as important for many adults who regard pets as part of the family. (as do Caroline and I !)
I was interested to read what Tom Wright has to say on the matter. Tom is an English New Testament scholar and Anglican bishop. He was the Bishop of Durham from 2003 to 2010. He writes in “Premier Christian Media”

First, we need to establish what we mean by ‘heaven’. There’s a Far Side cartoon that pictures a man sitting on a cloud in heaven, looking bored and thinking: “I wish I’d brought a magazine.” Fortunately, many people are starting to rethink that traditional view. The whole narrative of the Bible reveals that the God who made the world wants to bring heaven and earth together, and to come and live with us in that new creation. That’s not boring!
The point is not to leave this world and go somewhere called heaven. With Jesus, and through his Spirit, heaven has come to earth and we are called to join in the heaven-on-earth project now. But we also look forward to a future resurrection in the ultimate new creation, which is a heaven-and-earth combination, a total transformation of everything.
Then there’s the question of whether animals have souls. The idea of the ‘soul’ as an immaterial ‘me’ that is separate to the body is a Platonic concept that you don’t find in the New Testament, so none of us has a ‘soul’ in that sense. When the Bible talks about ‘the soul’, it refers to the Hebrew word nephesh, which is more like what we would mean by a person or a personality – the real me.
So, will we see animals and pets in that new creation? The Bible doesn’t have much to say on this, but I think we can carefully respond: “Yes.” When a human being loves and cares for an animal, and when that animal responds to that love and care, there is a bond between them, which is part of who that human being is. Just as when somebody loves God, there is a bond between them and God, which we call the Holy Spirit, and the Holy Spirit looks after that person until the resurrection. I don’t see any reason at all why looking after that person shouldn’t include, by a kind of overflow of grace, looking after all of the animals, birds and whatever that person has loved and brought joy to in this life.
You could start the question from the other end and say: “If God the creator made a world that included giraffes and whales and grasshoppers, and all the other weird and wonderful creatures, is it likely that the new creation would be boring and flat and wouldn’t have any creatures like that in it?” It seems to be far more likely that there will be an abundance of all sorts of creatures being gloriously themselves and sharing in all kinds of relationships with God’s human creatures.
And in the middle of that, perhaps there will be an older woman who will recognise among the plethora of delighted creatures a dog to whom, as a little girl, she once gave love and companionship and who returned that favour. I don’t see why that shouldn’t be so.
I would query some of what Tom Wright asking “What happens if the animal(s) in question are not loved”? However, I would love to think that Tom has got it spot on!