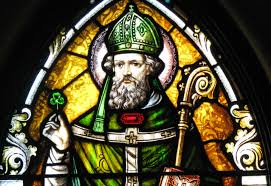 The Gospel of Christ featuring Lucy Jane Rutherford from the album Where Would I Be Without You? recorded and produced by Ross Gill

We have recently had St David’s Day – March 1st, St Georges Day is 23rd April, St Andrew’s Day 30th November and yesterday, March 17th was St Patrick’s Day. I may be wrong, but it does seem to me that it is St Patrick’s Day which is the most enthusiastically celebrated. So, who was St Patrick? Well from the internet I discovered:
St. Patrick was born in Britain—not Ireland—to wealthy parents near the end of the fourth century. He is believed to have died on March 17, around 460 A.D. Although his father was a Christian deacon, it has been suggested that he probably took on the role because of tax incentives and there is no evidence that Patrick came from a particularly religious family.
At the age of 16, Patrick was taken prisoner by a group of Irish raiders who were attacking his family’s estate. They transported him to Ireland where he spent six years in captivity. (There is some dispute over where this captivity took place. Although many believe he was taken to live in Mount Slemish in County Antrim, it is more likely that he was held in County Mayo near Killala.)
During this time, he worked as a shepherd, outdoors and away from people. Lonely and afraid, he turned to his religion for solace, becoming a devout Christian. (It is also believed that Patrick first began to dream of converting the Irish people to Christianity during his captivity.)
After more than six years as a prisoner, Patrick escaped. According to his writing, a voice—which he believed to be God’s—spoke to him in a dream, telling him it was time to leave Ireland. To do so, Patrick walked nearly 200 miles from County Mayo, where it is believed he was held, to the Irish coast. After escaping to Britain, Patrick reported that he experienced a second revelation—an angel in a dream tells him to return to Ireland as a missionary. Soon after, Patrick began religious training, a course of study that lasted more than 15 years.
After his ordination as a priest, he was sent to Ireland with a dual mission: to minister to Christians already living in Ireland and to begin to convert the Irish. (Interestingly, this mission contradicts the widely held notion that Patrick introduced Christianity to Ireland.) Familiar with the Irish language and culture, Patrick chose to incorporate traditional ritual into his lessons of Christianity instead of attempting to eradicate native Irish beliefs. For instance, he used bonfires to celebrate Easter since the Irish were used to honouring their gods with fire. He also superimposed a sun, a powerful Irish symbol, onto the Christian cross to create what is now called a Celtic cross
Legend has it that Patrick stood on an Irish hillside and delivered a sermon that drove the island’s serpents into the sea. While it’s true that the Emerald Isle is mercifully snake-free, chances are that’s been the case throughout human history. Water has surrounded Ireland since the end of the last glacial period, preventing snakes from slithering over; before that, it was blanketed in ice and too chilly for the cold-blooded creatures. Scholars believe the snake story is an allegory for St. Patrick’s eradication of pagan ideology.
Another legend credits Patrick with teaching the Irish about the doctrine of the Holy Trinity by showing people the shamrock, a three-leafed plant, using it to illustrate the Christian teaching of three persons in one God. This story first appears in writing in 1726, though it may be older. The shamrock has since become a central symbol for Saint Patrick’s Day.
Quote of the week
You are the only Bible some unbelievers will ever read.
John MacArthur